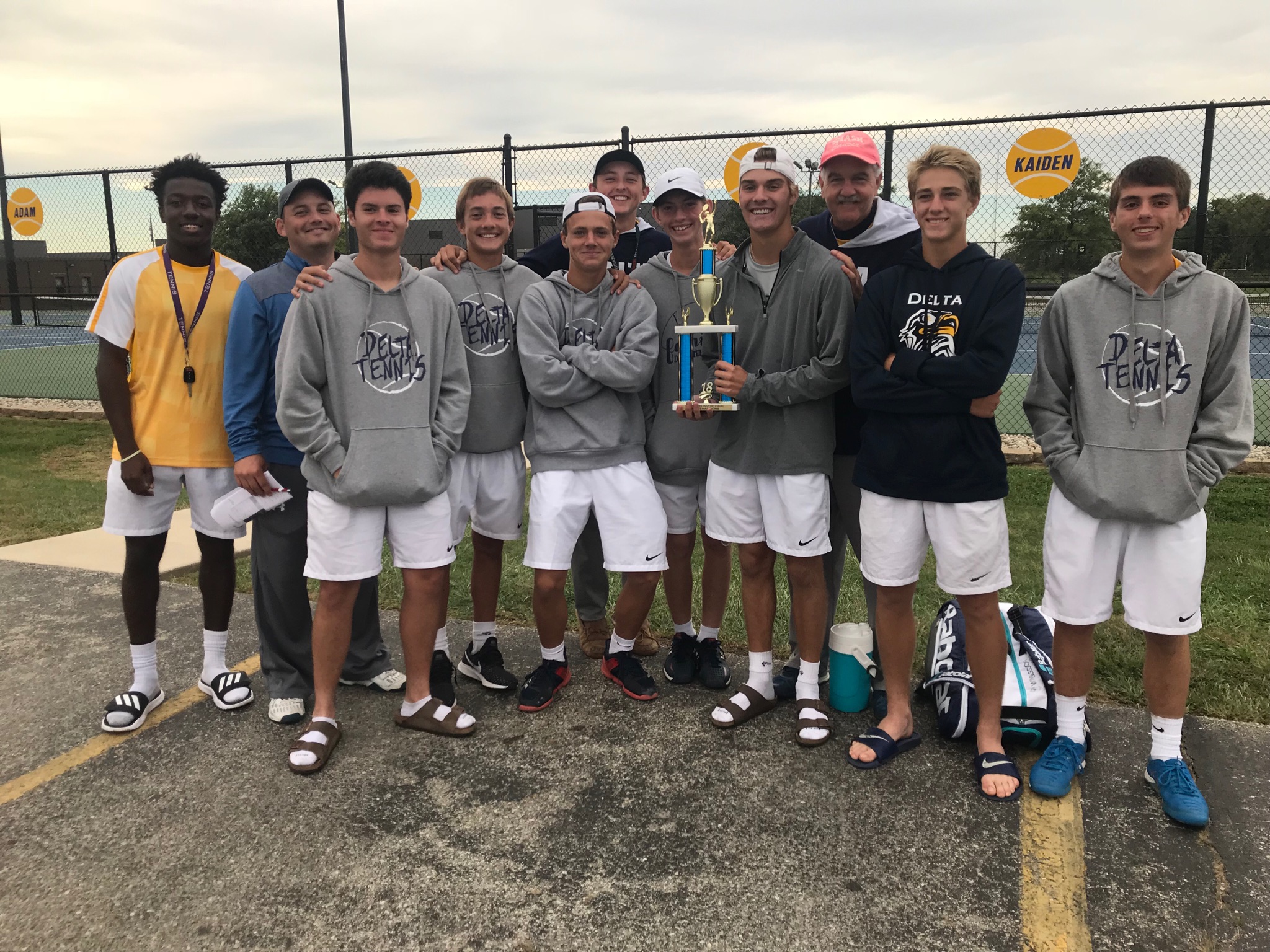 The Delta varsity boys’ tennis team claimed the Delta Invitational title on Saturday, handing state-ranked Richmond its first loss of the season in the championship match.

The 17th-ranked Eagles (15-3) shut out Lake Central 5-0 in the first round, then blanked Bellmont 5-0 in the semifinals. To cap off the day, the Eagles topped 29th-ranked Richmond 4-1.

Richmond entered the final match with a 16-0 record and had not lost at No. 1 singles, No. 3 singles or No. 2 doubles all season.

Delta senior Tannon Dishman defeated Richmond senior Ryan Hollingsworth 6-3, 6-4 at No. 1 singles in a showdown of two of East Central Indiana’s top players. Dishman improved to 18-4 this fall and now has 74 career wins (passing Daniel Jackson and Rob Robbins). He is tied for 10th all-time in DHS Tennis history.

Sophomore Tanner Southerland also went 3-0 on the day, including a 6-3, 7-5 victory over previosuly unbeaten Richmond junior Josh Jones at No. 3 singles. Southerland, who had lost to Jones last season, is now 15-4 this fall.

At No. 1 doubles, senior Joel Ashman and sophomore Brandon Jackson downed Richmond’s George Dickman and Jake Miller 6-2, 6-2. They also beat opponents from Lake Central and Bellmont by 6-0, 6-0 scores. The three victories moved Ashman to 18-2 and Jackson to 18-3 this season.

At No. 2 doubles, junior Mason Knight and sophomore Michael Curtis beat Richmond”s previously unbeaten team of Luke Hays and Joey Chimenti, 6-4, 6-2. Curtis, who won twice with Knight and once with junior Cade Brown on Saturday, is 18-3 this season. Knight is 16-3.

Senior Ben Bamidele is now 15-6 at No. 2 singles after going 2-1 on Saturday. He beat opponents from Lake Central and Bellmont, then dropped a hard-fought third-set tiebreaker decision to Richmond sophomore Kyle Hollingsworth, 4-6, 7-6, (1-10).

Delta will finish the regular-season on Monday at Mt. Vernon in a Hoosier Heritage Conference match. Mt. Vernon is a school-best 14-2 at the varsity level and 16-0 at JV. The Marauders are 5-1 in the HHC while Delta is 6-0.

No Events This Week

Events are added by athletic staff.
View All Events