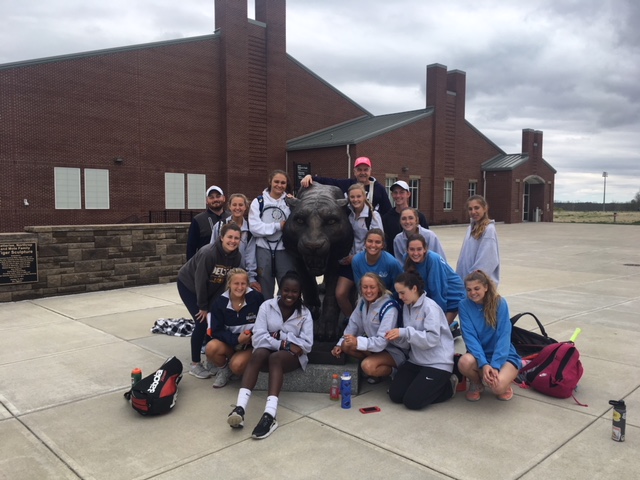 On a rainy, cold Saturday, Delta got an opportunity to face some outstanding competition by playing third-ranked Munster and 22nd-ranked Jasper indoors at DePauw University courts in Greencastle.

These matches were scheduled after the original event, the Crawfordsville Invitational, was rained out Saturday.

The 16th-ranked Eagles lost 0-5 to Munster, a traditional tennis power from northwestern Indiana. Our best chance to win a match was at No. 2 doubles, where sophomores Tynan Dishman and Abby Bamidele split sets before falling in a third-set tiebreaker. Freshman Maggie Hunt rallied for a close second set at No. 3 singles, losing 1-6, 4-6. Munster dominated the other positions, including No. 1 singles where Munster freshman Sanjana Tallamraju showed why she is among the top contenders to win the state singles title. A lefty with a 100-mph serve, she was impressive! And her sister at No. 2 singles, junior Shalini Tallamraju, was also outstanding.

The Eagles bounced back in the afternoon match to beat Jasper 4-1. This match was a rematch of last year’s quarterfinal round of the State Team Finals (where Jasper defeated Delta 3-2). Delta graduated four of its players from a year ago, while Jasper graduated five. With two freshmen and three sophomores in our varsity lineup, this was a nice win for our program. Ellie Snider collected another solid victory at No. 1 singles, and freshmen Gwendolyn Clark and Maggie Hunt each battled strong for singles wins. Tynan and Abby played very well at No. 2 doubles for a straight-set win. Mayzie Hinkle and Maggie Manor faced another tough opponent and had three set points in the first set but were unable to pull out the victory,

Our JV players had an excellent day, winning six and losing one match on the day. Sara Cardemon and Ryley Bilbrey were 3-0 in doubles; Mary Groover and Liv Bradburn were 2-0 in doubles, and Carolina Vidal was 1-1 in singles.