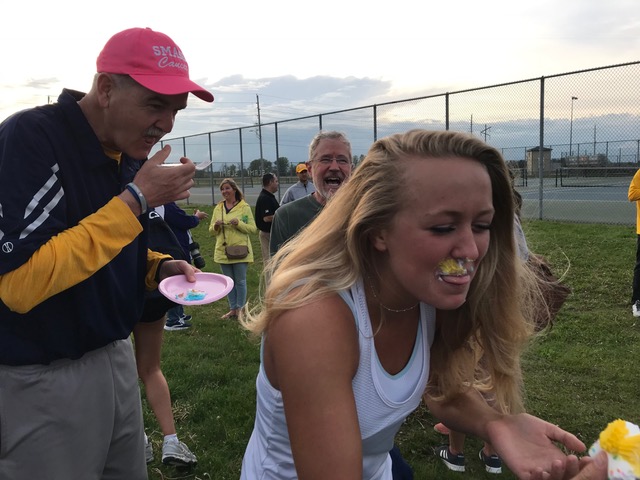 In a showdown of two of the state’s top girls’ tennis teams, 10th-ranked Delta edged 11th-ranked Center Grove 3-2 on Thursday evening at the Greenfield-Central HS courts.

It was a continuation of an amazing season for the young Delta team, which starts three sophomores and two freshmen among its top seven varsity players. The Eagles (16-1) have beaten three highly ranked teams: No. 4 FW Carroll, No. 11 Center Grove and No. 12 Hamilton Southeastern. Their only loss was to No. 3 Munster.

Center Grove, which has reached the Team State Finals in each of the past three seasons, returned five of its top seven players from a year ago when the Trojans shut out Delta 5-0 without dropping a set.

But this time, Delta turned the tables. Doubles players Tynan Dishman and Maggie Manor won 6-2, 6-1 at No. 1 doubles, and Mayzie Hinkle and Abby Bamidele won 6-2, 6-3 at No. 2 doubles.

Dishman and Manor are 10-1 together at No. 1 doubles, while Hinkle and Bamidele are 8-0 together at No. 2 doubles. Overall, Hinkle has 13 wins this season and 60 for her career. She is the 22nd girl in DHS Tennis history to reach 60 or more career varsity wins.

Senior Ellie Snider, competing on her 18th birthday, then topped Center Grove senior Ellie Strube 7-5, 6-2 at No. 1 singles to complete the victory. The first set featured many long, grinding rallies and close games. Then, with the team match on the line, Snider came up clutch in the second set. She is 15-1 this season and has 52 career varsity wins in three seasons.

Center Grove won the No. 2 and No. 3 singles positions, but the Eagles’ freshmen Gwen Clark and Maggie Hunt competed well. Both have won two-thirds of their matches this year against some rugged competition.

Delta also won the JV match, 5-4. Sara Cardemon and Ryley Bilbrey remained unbeaten at No. 1 doubles with a tiebreaker victory. Other winners were Mary Groover and Molly Hunt at No. 2, Corinne Jones and Lily Brannon at No. 4, Madalin Davis and Carly Ratliff at No. 5, and Olivia Miller and Savanna Hickey at No. 6.

Next up for the Eagles will be a Saturday conference double-header. The Eagles face Shelbyville at 11 a.m., then will play New Palestine at 2 p.m. New Pal also is unbeaten in conference, setting up a match that will determine the HHC champion.

Then, on Tuesday, the Eagles will complete the regular season by hosting Indianapolis Bishop Chatard on Senior Day.