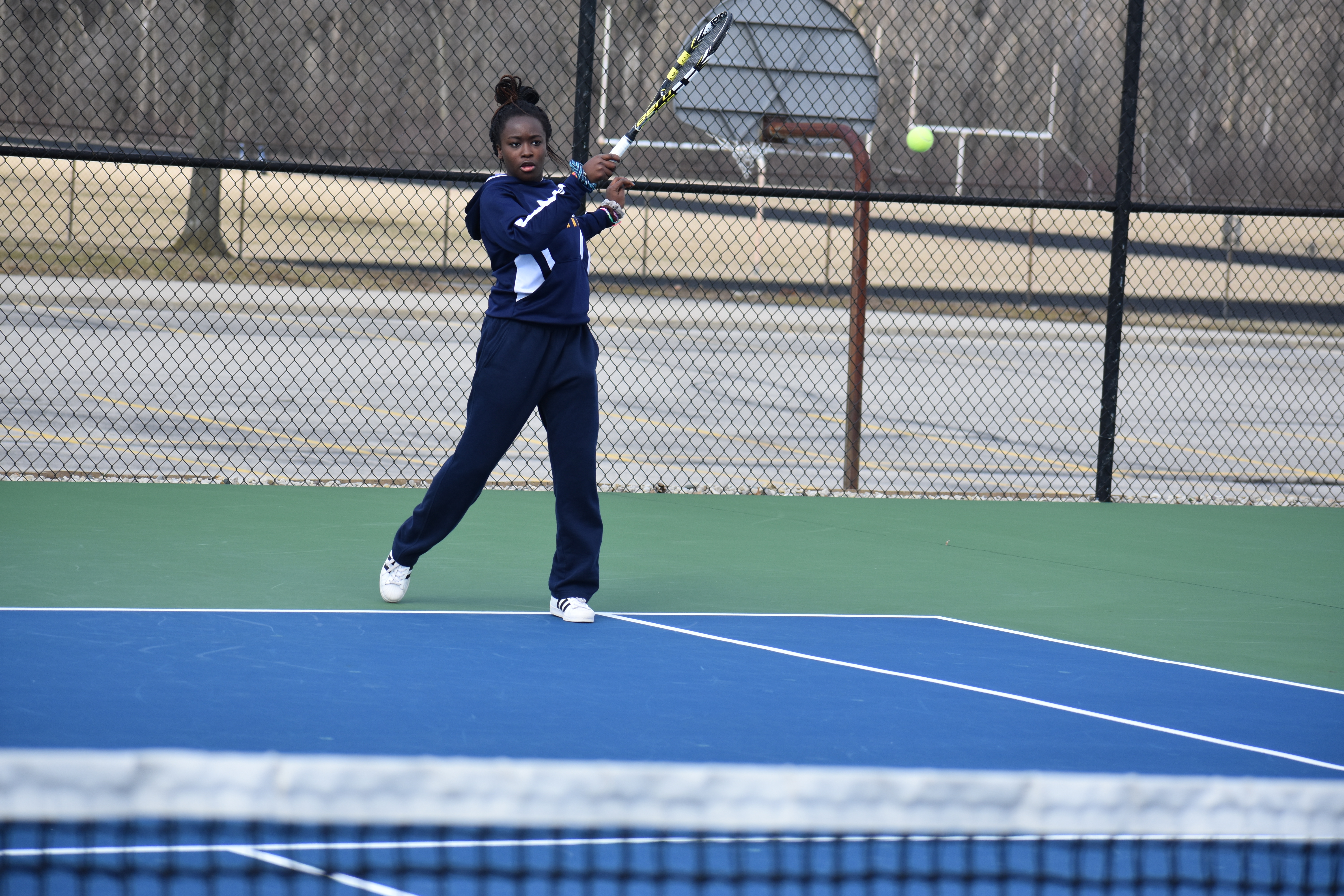 Delta Tennis added another chapter to its history as a giant-killer with an outstanding performance Saturday in the Delta Invitational.

And Delta won the tournament with a lineup of two freshmen, three sophomores, and two seniors.

16th-ranked Delta (12-1) started its day with a 5-0 shutout of Terre Haute North. THN entered with a 4-1 record, including a victory over state-ranked Bloomington South. But Delta was dominant, allowing the Patriots to collect only 11 games total. Ellie Snider, Gwendolyn Clark and Maggie Hunt swept the singles.

The next round provided a stiff challenge, as Fort Wayne Carroll entered with a 9-0 record and a No. 4 state ranking. The Eagles played outstanding in doubles, as Tynan Dishman and Maggie Manor beat an excellent opponent 6-3, 6-1 at No. 1 doubles and Mayzie Hinkle and Abby Bamidele won 6-1, 6-2 at No. 2 doubles. Carroll won easily at No. 2 and No. 3 singles, which meant the match would be decided at No. 1 singles. Delta senior Ellie Snider and Carroll senior Mia Toscos matched each other stroke for stroke for nearly two hours, with Snider rallying for a 4-6, 6-3, (10-6) victory. This was the highest-ranked team the Delta girls have beaten in more than a decade.

There was little time to celebrate, though, because 14th-ranked Hamilton Southeastern
was the opponent for the finals. Due to rain, the match moved indoors to the Muncie YMCA Tennis Center.

Hinkle and Bamidele provided a major boost at No. 2 doubles with their best match of the season. After trailing 0-4 in the opening set, they found their groove and rallied but still dropped the first set 4-6. Hinkle and Bamidele hung tough in the second set for a 6-4 win, forcing a third-set tiebreaker. Under pressure, they came up big, playing flawlessly in a 10-4 tiebreaker win.

HSE picked up a victory at No. 3 singles when Delta freshman Maggie Hunt had to retire with a wrist injury. She trailed 4-5 in the first set at the time, but needs some rest to recover.

HSE also had the advantage at No. 2 singles, where Delta freshman Gwen Clark battled hard but couldn’t overcome the powerful strokes of HSE’s Tea Vrkic. HSE won the match, 3-6, 2-6.

The tournament championship came down to No. 1 doubles, where Delta sophomores Manor and Dishman faced HSE senior Jeorgia Templin and junior Taylor Cleary. The HSE duo had wins over state-ranked teams Cathedral, Avon, Fishers and Franklin Central this season and had lost only to state-ranked Zionsville. But Manor and Dishman showed grit in a 6-4, 6-3 victory.

Making the day even better was the performance of the Delta junior varsity team, which competed in the tournament as a varsity team to round out the eight-team field. The second unit played Yorktown’s varsity first. Yorktown was short-handed, with three regular players gone at a school function out of state. The Delta JV beat Yorktown 5-0, as Carolina Vidal, Liv Bradburn and Madelyn Haley won in singles, and Sara Cardemon/Ryley Bilbrey and Molly Hunt/Mary Groover won in doubles. Bradburn hustled her way to a third-set tiebreaker victory at No. 2 singles in a match that featured many long rallies.

The JV Eagles then faced Hamilton Southeastern and Fort Wayne Carroll in their final two matches. They lost both matches 0-5 to those state-ranked opponents, but they competed hard throughout the day. In the final match of the day, Hunt and Groover pushed FW Carroll to the limit at No. 2 doubles before losing an entertaining match.

Overall, a fantastic day for Delta Tennis. Next up is a road match at regional rival Marion on Wednesday, followed by the annual SmashCancer match on Thursday at Yorktown.