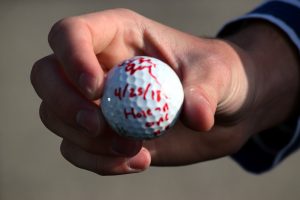 First, he called the shot.  Then, he made the shot.

Senior Tyler Jobe, who recently committed to Marian University to play on the men’s golf team, made his first career hole-in-one on Wednesday, April 25 at Albany Golf Club.  He used a sand wedge to ace the 105-yard 8th hole during a practice round with Coach Steve Wuthrich and freshmen Brady Hunt and Logan Manor.

Prior to teeing off on the hole, Jobe jokingly predicted that he was going to make a hole-in-one.  And then he actually did it.  His tee shot landed a few inches behind the hole, and then spun back into the cup.  Jobe said he did not immediately know that it went in, but Coach Wuthrich, who has witnessed several aces, was confident it was in the hole.

For the nine-hole round, Jobe shot 2-under-par 33.

Jobe, the team’s top golfer, is recovering from a recent foot injury.  But based on Wednesday’s shot, it looks like he’s back in the groove.