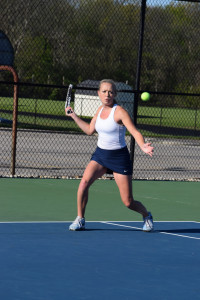 Delta sophomore tennis player Ellie Snider won her No. 1 singles match in Saturday’s Homestead Semi-State and earned a berth in the IHSAA Singles State Finals on Friday, June 9 in Indianapolis.

The Eagles lost the team match 3-2 to Fort Wayne Carroll in an exciting match that featured many twists and turns.

One of the twists came at No. 1 singles, where Snider improved to 20-4 with a 6-1, 6-4 victory over Carroll junior Sydney Jackson, an All-State player from a year ago who entered Saturday’s match with a 24-3 record.  Snider dominated most of the match, winning 6-1 and building a 5-2 lead in the second set before Jackson made a late rally that came up short.

Another exciting moment Saturday came at No. 2 doubles, where Delta juniors Lexie Manor and Kortney Helm faced a Carroll team that entered with a nearly perfect season record of 27-1.  Manor and Helm fell behind early, but stormed back to win 4-6, 6-2, 6-3 for their fourth three-set win of the season.  Overall, Manor and Helm finished 20-4 in their first season of varsity tennis.

To advance to the IHSAA Team State Finals, the Eagles needed one more point — and they almost got it.  Senior Abby Shafer and junior Emma Snider battled Carroll’s Lauren Vanwyngarden and Mia Toscos in the day’s longest match.  The match was topsy-turvy throughout as Carroll built a 5-1 lead in the first set, only to watch Delta rally for six straight games and a 7-5 first-set win.  Then the Eagles built a 5-2 lead in the second set, only to see Carroll roar back for five straight games and a 7-5 win to even the match at a set apiece.  The teams battled back and forth to a 2-2 tie early in the third set before Carroll finished strong with a 6-2 win and the team victory.  Toscos was a returning State Finalist in last year’s individual doubles tournament and she and her new partner are 26-3 this season, while Shafer and Snider finished 21-3 in their first season together in doubles.

Carroll’s other points came at No. 2 and No. 3 singles in straight-set decisions.  Junior Grace Belangee at No. 2 singles and sophomore Mayzie Hinkle at No. 3 singles each finished with fine records of 21-4 for the season.

The eight teams at the IHSAA State Finals will be:
Cathedral vs. FW Carroll
Carmel vs. Terre Haute South
South Bend St. Joseph’s vs. Jasper
Center Grove vs. Providence

Delta finished 18-4 and won its third straight regional title and its sixth regional in the past seven years.  The Eagles competed against five of the eight State Finalist teams this season in a power-packed schedule.