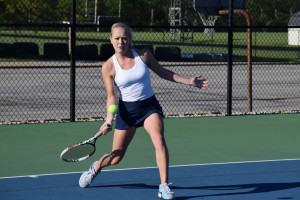 In a match full of momentum swings, Delta started and finished strong to sweep past Marion 5-0 on Thursday night for the Marion Regional championship at the Bill Beekman Tennis Center.

The 16th-ranked Eagles (18-3) will face 13th-ranked Fort Wayne Carroll (also 18-3) at 10 a.m. Saturday in the Homestead Semi-State.  The winner will advance to the IHSAA State Finals. Admission is $5 per person for Saturday’s semi-state.

Delta’s girls now own a 10-3 record against Marion since the rivals began playing annually in 2010.  However, this is the first time any of those matches has resulted in a 5-0 sweep for either team.

Delta jumped out rapidly in the first 30 minutes of the match, winning the first sets by scores of 6-0, 6-1, 6-1 and 6-2 in four of the five matches.  But Marion roared back into contention as two matches went into a third set and two other matches got very close.  The Eagles then finished strong, regaining control for the sweep.

Also winning in three sets was the No. 2 doubles team of juniors Lexie Manor and Kortney Helm, who won 6-2, 4-6, 6-4.  Helm and Manor improved to 19-4 with their second three-set win of the season over Marion.

Next off the court was sophomore Mayzie Hinkle at No. 3 singles. She quickly won the first set 6-1, then fell behind in the second set before rallying to close it out 7-5.  Hinkle is 21-3 this spring.

Clinching the regional title was the No. 1 doubles team of senior Abby Shafer and junior Emma Snider.  They won 6-1, 7-5 over Elizabeth Wuertley and Maria Porter and are now 21-2 together this season.

Only 16 teams remain alive in the chase for the state championship. Here is the breakdown:

Culver Academies Semi-State
No. 7 South Bend St. Joseph vs. unranked Warsaw
No. 1 Carmel vs. No. 17 Munster

Jasper Semi-State
No. 4 Providence vs. No. 11 Columbus North
No. 9 Jasper vs. No. 20 Evansville Memorial